Woo hoo! It actually was summer weather this weekend! Seriously, this has been the coldest, rainiest summer ever. So when it gets into the mid-90's we don't complain.

Thursday we met up with Katie (friend from work) and her son Luke at Grass Lawn Park, where they have a spray area for the kids to play. It was so hot I couldn't walk barefoot on the cement. Taylor was totally not interested in the water, so he kept wandering off and wanting to sit and play on the hot cement. We eventually just moved to the shady grass area where he and Luke played with trucks and kicked the soccer ball around. Then we went over to Allen & Sandy's for pizza Thursday. It became a tradition this summer as their grand kids were in town helping with the business. Taylor and I joined the fun a few times. We ended up going for a boat ride, which was nice to get out on the water. Taylor of course fell asleep, but woke up right as we pulled up to the dock. We tried to stay and watch a bit of the Olympics, but Taylor was ready for bed.
Friday after Taylor's nap and Jason's MRI (for back issues), we headed back to the Sanders for a day in the sun with other church friends. Taylor played on the beach in the sand, and also in the kiddie pool that was out. Then we all hoped on the jet ski and cruised around. Taylor loves to sit in the front and check out all the action. Unfortunately I had to work that night, so I took off early as Jason and Taylor enjoyed the rest of the evening. 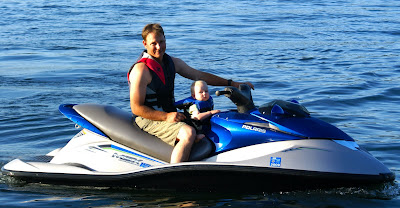 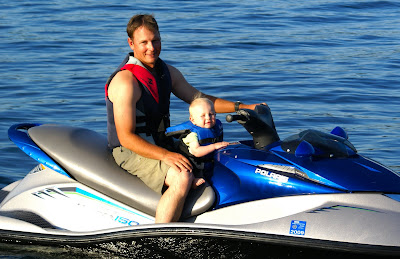 Saturday, again after mid-day nap, we headed to the cool relief of the mall and did a little shopping for ourselves. Taylor had fun wandering around, but had a tendency to want to wander in the opposite direction that we were headed. After some dinner at the Cheesecake factory and a bit more wandering, we headed home to get Taylor to bed on time.
Sunday was church, naps, then we headed out to Maple Valley where a co-worker of Jason's lived. Him and his wife have a huge piece of property on which they built their own beautiful house. It was decorated just as I like to: lots of pictures of the family. Their two daughters weren't home, but we had fun BBQ-ing and getting to know them better. Their cat just had kittens 2 days prior, so Taylor got to see them. He was more interested in the older sibling of the kittens. She was very friendly and kept coming over to Taylor to let him pet her. He got so excited, and kept following her all over the yard. They offered to let us have one of the new kittens. We'll see. They also had a 4 wheeler that they like to drive on the trail around their property, so the three of us hopped on and took a ride. It was a lot of fun. Home again it was to prepare for the next week ahead.
Posted by Rachel at 10:59 AM