Well, another session of Lil' Kickers is winding down, so it was time for team pictures. We missed out on the last ones, so I made sure we were there this time. So which child decides to throw a hissy fist and cry through the whole thing? Yes, that would be Taylor. So I stood next to him to calm him, hoping I could make a break for it when the photographer got going. But when I tried to sneak away, the photographer said "Stay there mom!" in a stern voice. Ok, great. The week I wear grubby clothes, don't put on make up, and throw a hat over my matted hair, I'm stuck in the team photo? Wonderful. Don't worry, I edited myself out of this one. :) 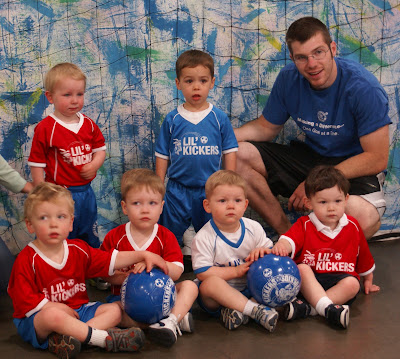 Night at the Ballpark

Last night we joined a bunch of my co-workers at Safeco Field for a night of baseball. They'd bought a handful of tickets so we could cheer on our nursing colleague Makayla, who was throwing out the first pitch for UW Medical Center night. Not only does she work there, but she also used to be a patient in our NICU. So we all came to give her some encouragement and to enjoy an evening of America's favorite past time.
It was also Taylor's first baseball game, so that was fun. He was all geared up in his baseball hat and full of hot dog (we bought $1.50 dogs from Costco on the way there, of which he ate almost a whole one by himself!). We were in the nosebleed section, but he still had a great time looking at all the excitement going on around him. He kept pointing to the Safeco Field sign directly across from us and saying "D!". (It is his favorite letter and can find it anywhere.) We got in on the wave together, which he thought was funny. He gave such sad puppy dog eyes to the guy behind us that he shared his kettle corn with Taylor. I swear, this kid begs for food like no other. Toward the end, Taylor took a turn holding one of the signs people had made to get us on the big screen. The local channel that plays all the Mariner games is FSN, so they had signs that said "Foxy, Sexy, Nurses at UWMC NICU", or on a more sober note "Fighting to Save Newborns at UWMC NICU". Taylor looked pretty convincing holding that sign, making a cute little face. Half way through the 6th inning we called it quits because Taylor was starting to get antsy, and it was already passed bedtime. The game ended up going 12 innings, so it was probably good we left when we did. 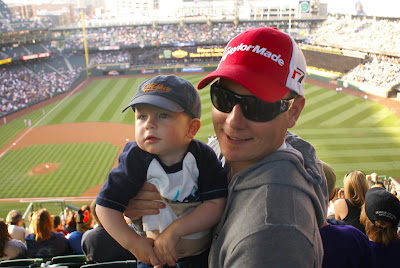 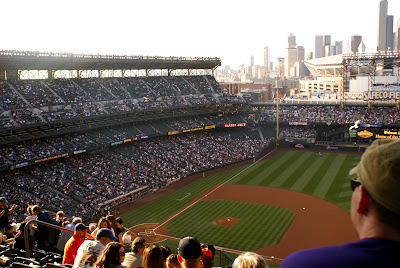 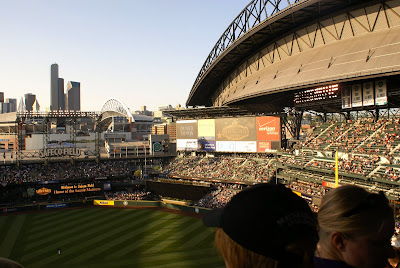 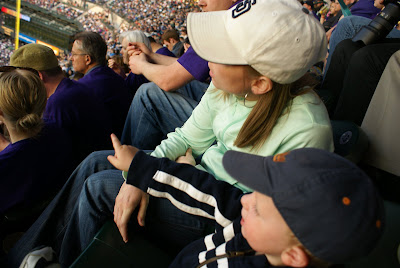 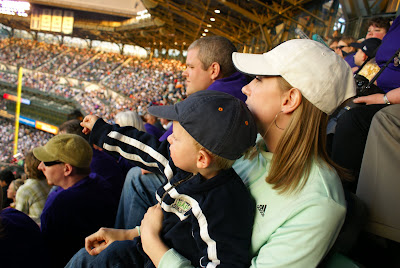 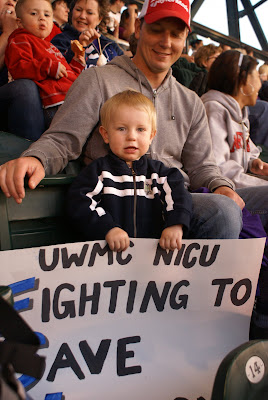 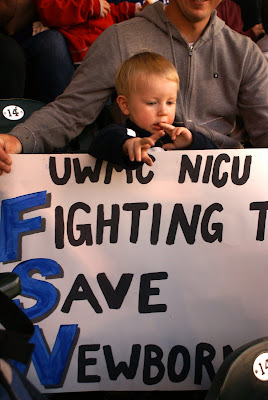 Happy Mother's Day to all you wonderful moms out there! I hope you felt loved and appreciated today. We had a great morning celebrating with my parents. First we all went to church together. Taylor had a nice card, a flower, and a kiss for me when we picked him up from Sunday School. Then it was off to brunch at the BluWater Bistro on Carillon Point, where we enjoyed a great brunch and the beautiful scenery of Lake Washington and the Olympic mountains. It was a gorgeous sunny day, so it was nice to walk out on the dock afterward and watch the boats coming in and out. Taylor was not in a picture taking mood, so I just captured what I could. When it was time to leave, my parents gave me a Mother's Day gift from Taylor. It was a heart shaped piece of cement with Taylor's name and hand prints on it. So creative my mom is! When we got home I put it out by the front door. Taylor promptly put his hands in his print and said "hans". I love that little guy. 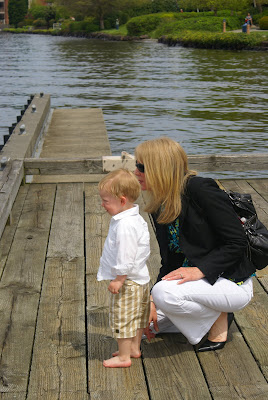 Taylor and Nana looking at the boats 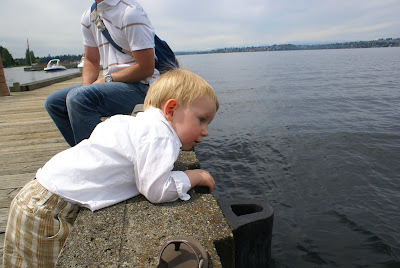 Checking out the water 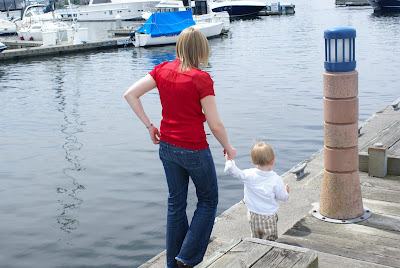 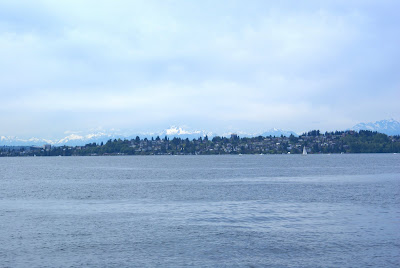 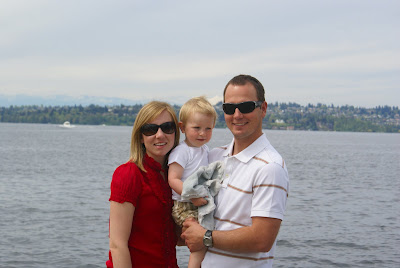 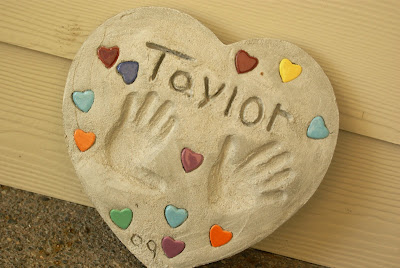 Since it was a nice warm evening, we decided to grab some dinner to go and take it to the park for a picnic. There is a nice grassy area by the Sammamish City Hall that looks out to downtown Seattle and the Olympic mountains. We enjoyed some KFC, then played a little Frisbee and soccer. Taylor quickly figured out how to throw the Frisbee, and had lots of fun with that. Then it was on to soccer. Jason and Taylor have become a bit more competitive in the "one-on-one" play, to the point that Taylor will now fake a foul when Jason "body checks" him. (I'm not sure if I'm correct in my soccer terminology, but I think that is right.) So now, when Taylor goes to soccer class, he can't run more than a few feet without falling to the ground and saying "oh" as if someone has just fouled him. Nice Jason, way to teach him the important stuff. It is kind of cute though. After a nice sunset, it was time to head home. I just love nights out with my boys. 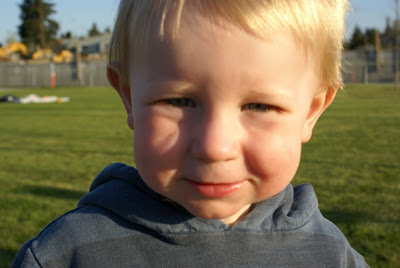 Saying "hi" to the camera 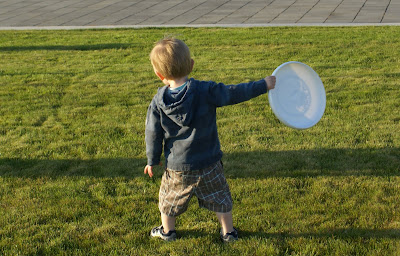 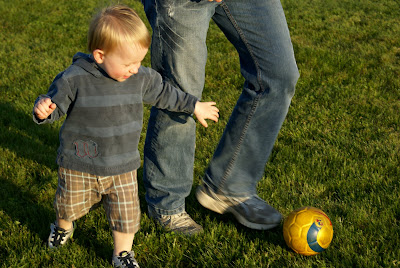 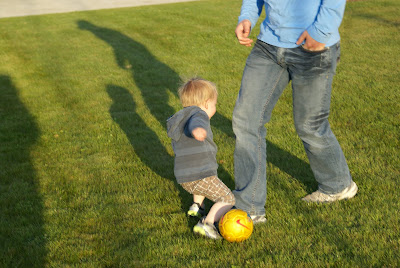 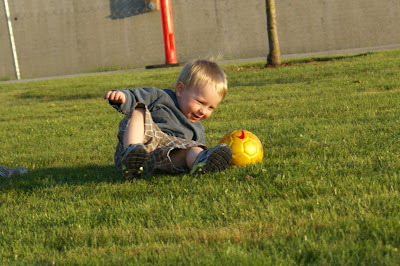 Fake falling, and thinking it's funny

For those who are unaware, Seattle is gorgeous in the spring! Here is why. 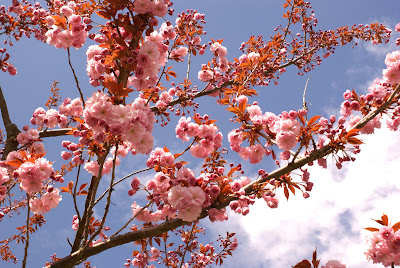 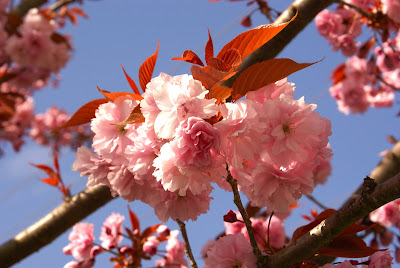 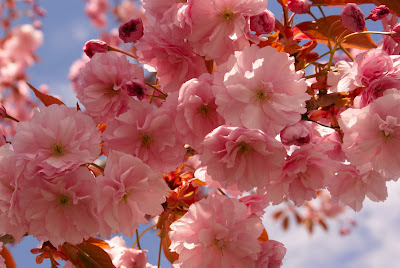