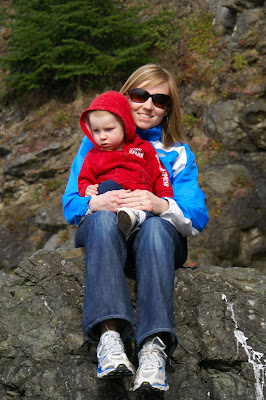 This week we were blessed with a visit from our San Diego friend Beau. He drove up with his good friend Juan and girlfriend Susan. We were able to host them in our downstairs for a few nights as they ventured around this wonderful city of ours. Taylor, though very shy, was glad to have visitors. I think it was just a nice change of pace for him. By the time they left he was saying "Bo" and "Susa", and was sad the first morning he went downstairs and they weren't there. But we were glad for the time we did have with them. 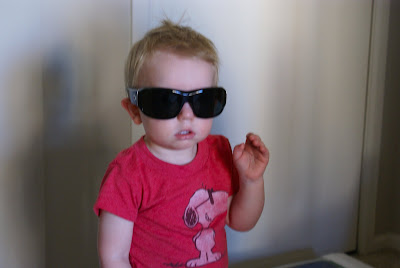 On Tuesday, we took them up to one of our new favorite spots: Deception Pass. We first took the short ferry ride over to Whidbey Island. It was a beautiful sunny day, so you could see all the mountains. So gorgeous! Then we drove up the island, seeing all the wonderful scenery on the way. After a quick spot for sub sandwiches, we arrived at Deception Pass. We started out by walking over the bridge, which I don't think I've ever done. the rail is a bit low, and the bridge is very high over the water. Jason clung super tight to Taylor as we walked across, and Beau got too nervous to stop for picts. It is pretty scary, but an amazing view. We sat on the other side and ate lunch, then returned to the other side to take a hike down to the beach. 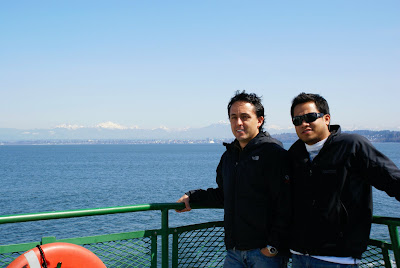 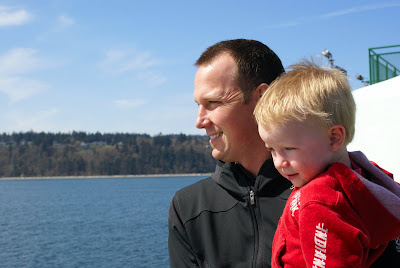 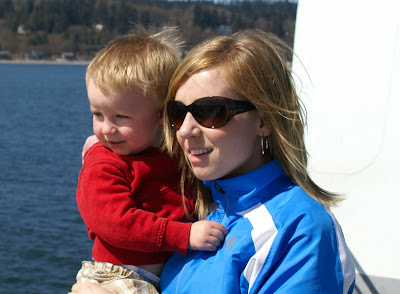 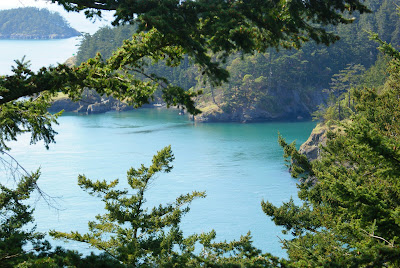 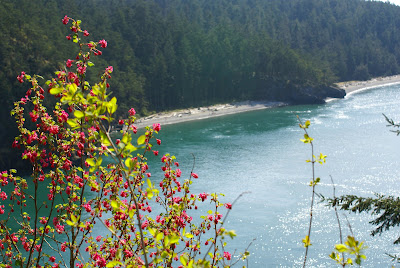 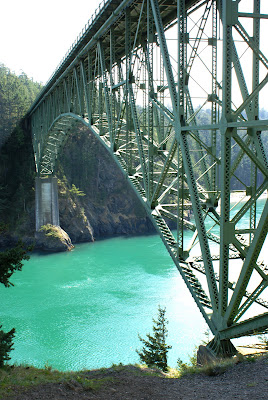 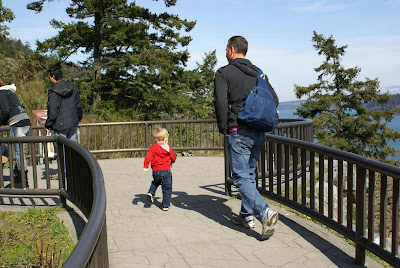 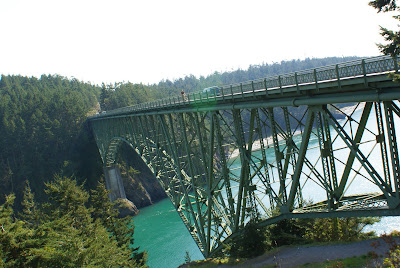 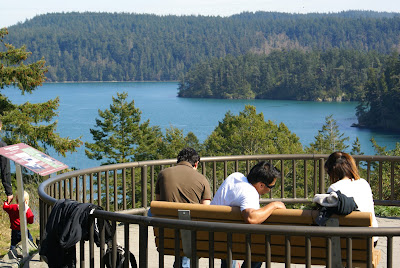 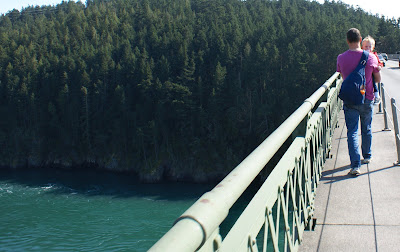 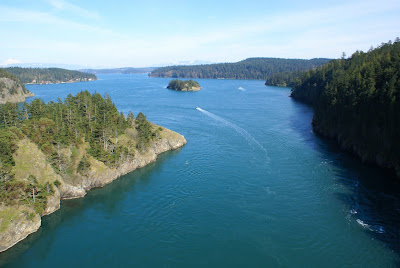 Down on the beach under the bridge, we relaxed in the sun, and figured out some fun activities to keep us busy. I prompted a driftwood boat making contest, which we did growing up. However it turned into "who can sink the boat first by dive bombing it with rocks". Juan really took on the challenge, creating The Titanic out of a big piece of wood and two masts. Then we did some rock skipping and stick ball playing (hitting stone into the water with a stick from the beach). After the sun started to go down, we hiked back up to the car and headed to La Conner. 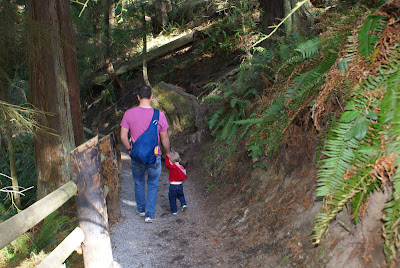 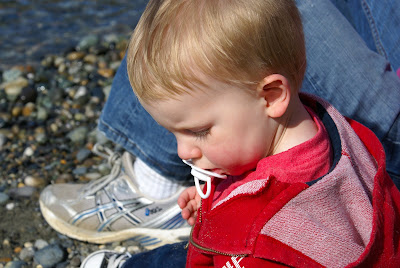 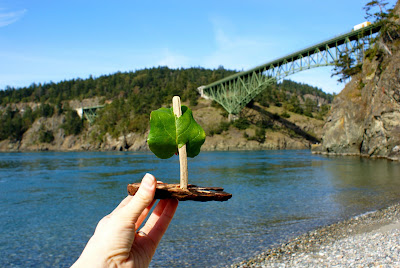 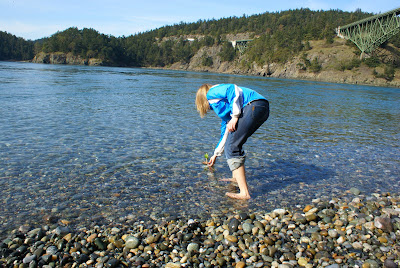 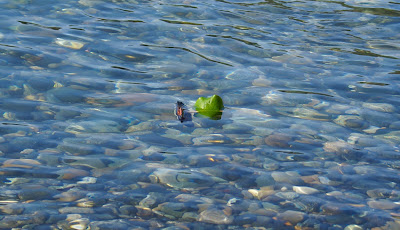 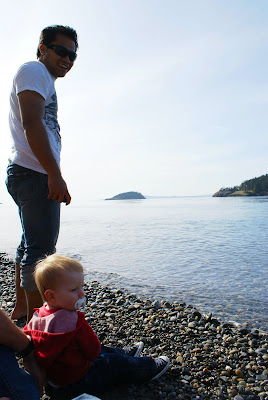 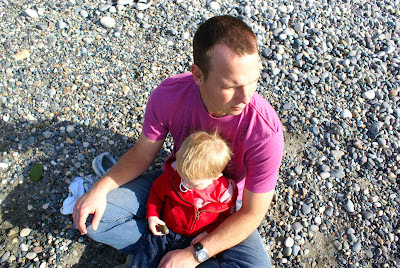 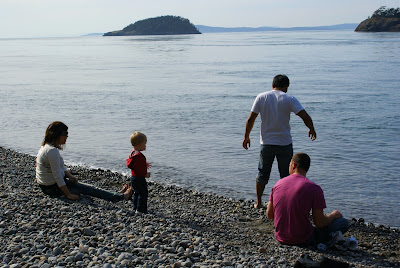 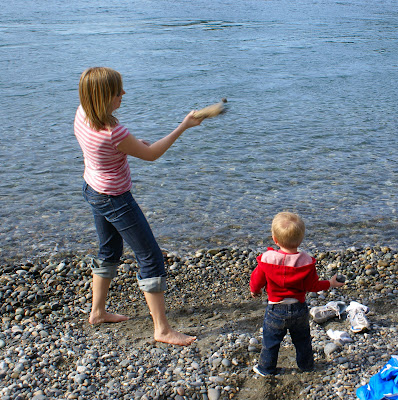 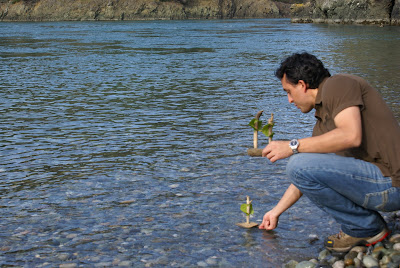 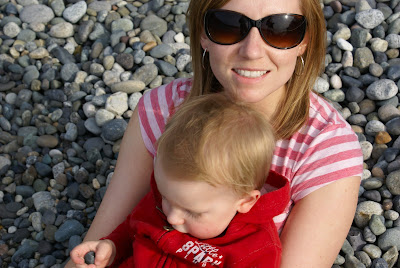 *Side note: Taylor had finally fallen asleep the second we got the Deception Pass. Though we tried to pull him out of the car without waking him, we woke up and was a bit grumpy, thus the binky.

We headed to La Conner hoping to see some tulip fields in bloom, but because it has been cold so late this year, only the daffodils were blooming. We drove around for a bit, got ourselves lost among the fields, resorted to asking Beau's GPS how to get us out of there, then headed for the freeway. Meanwhile, Taylor had fallen fast asleep.
Right before we reached the freeway, I saw the Snow Goose Produce stand. A friend the day before had just told me how great this place was for their enormous ice cream cones. My stomach got the better of me, and we stopped to get some. However the line for the ice cream was so long, that Taylor woke up as I was waiting in the car with him. Woke up very not happy. So the rest of the car ride home he was a fussy nightmare, and I wasn't sure the ice cream had really been worth it. We ended the day with some take out Thai and great conversation.
Thanks Beau, Susan, and Juan for visiting. We love when people come to see us. You welcome back whenever you'd like! Hotel Jenkins is always open!
Posted by Rachel at 3:46 AM